The four-day Bashundhara Bangladesh Open-2017 saw an exciting final round when home favourite Siddikur Rahman almost pulled off his third Asian Tour trophy before he posted a runner-up finish at prestigious Kurmitola Golf Club (KGC) on Saturday.
Siddikur totaled 13-under-par 271 to finish four strokes behind champion Jazz Janewattananond of Thailand.
Despair for Bangladesh Golf star Siddikur, who got to the end of his fairytale Bashundhara Bangladesh Open story only to find Jazz on the final page.
Jazz became one of the youngest players in Asian Tour history to cap a dominant performance over the four days to lift the unique trophy designed in the form of Bangladesh’s national animal, the Royal Bengal Tiger. The young sensation shot a four-under-par 67 to finish with a combined score of 17-under-par 267 at KGC on Saturday. 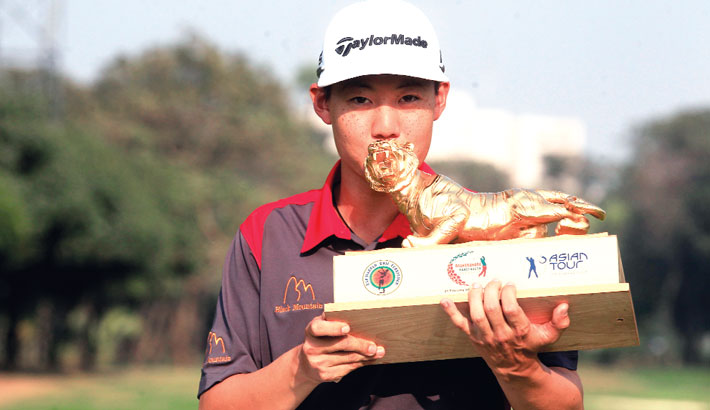 Thailand golfer Jazz Janewattananond poses for photographs with his trophy of the ‘Bashundhara Bangladesh Open 2017’ at Kurmitola Golf Club in Dhaka on Saturday.
“It has been a long time since I last played so well. It was a great round and a superb week. Getting such a huge crowd following me on my home course, I am really thankful. I am happy with how I played too,” Siddikur told after ending his Bashundhara Bangladesh Open campaign.
“I played really good golf. I struggled with food poisoning earlier this week so to finish second here, I have no complaints. I stayed at home to recuperate earlier this week so I didn’t get much preparation. I am glad I was able to recover in time for the tournament,” he added.
Siddikur, who was on the brink to end his three-year title drought on the Asian Tour, looked very much in control until a bogey on hole 13 to take second place at the US$300,000 Asian Tour event. Siddikur won US$33,000 after ending his sparkling four-day long performance.
The X-factor was the back-nine-hole, which has been very good to Siddikur. A vociferous local crowd came to KGC in the final day to witness Siddikur’s feat. A packed KGC of around 2,000 spectators chanted “Siddikur! Siddikur!
“I was just playing for par on the 18. I heard Dodge was at 11-under-par in third so I thought I just needed a par to keep my second place. But I made a birdie there. It’s my favourite hole here,” Siddikur said. 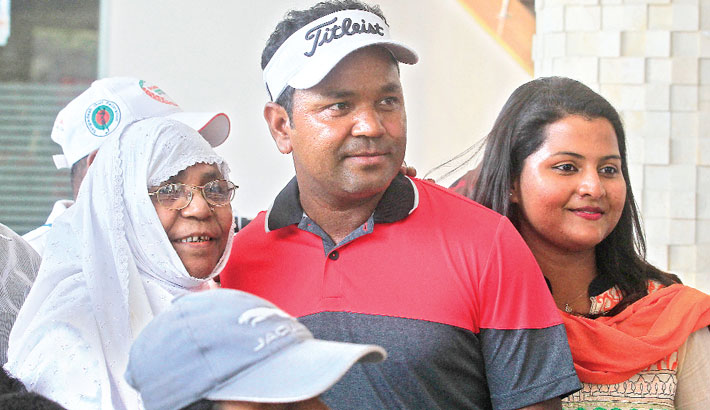 Siddikur Rahman captured with his mother, left, and wife Samaun Anjum Auroni during the prize giving ceremony on Saturday.
“It has been an excellent week. The course is great and the weather too. Most IMPORTANTLY, I had a great home support this week. I am truly appreciative. My parents were out here supporting me today and I have my brother Rafiqul on my bag too,” he added.
Siddikur opened with three birdies before adding as same birdies against one bogey to finish on a superb five-under-par 66.
Dodge Kemmer of USA and India’s Shubhankar Sharma’s final round collapse also handed Siddikur Rahman the chance to claim the second spot.
Bangladesh masterpiece Siddikur became the first Bangladeshi champion on the Asian Tour when he won the 2010 Brunei Open and subsequently added a victory at the 2013 Hero Indian Open.